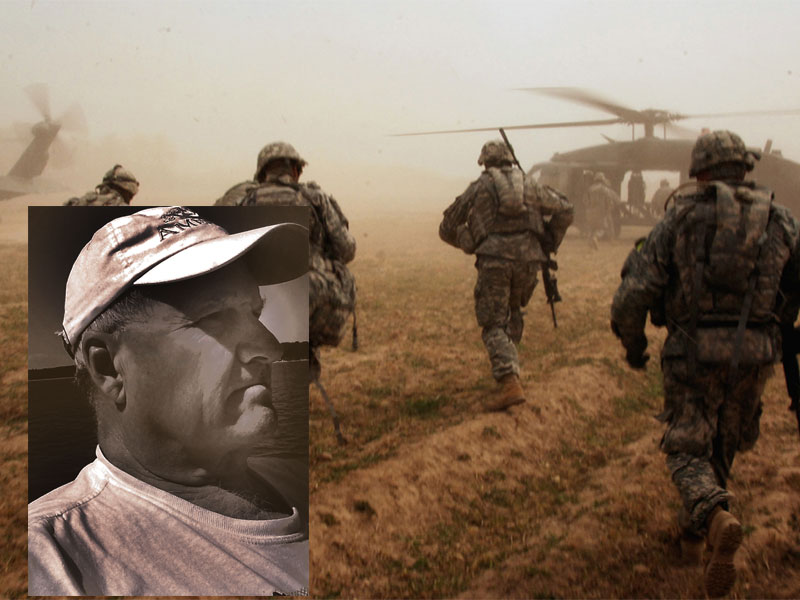 It was November of 2003.  This country had invaded Iraq seven months previously, and I was sent over to “cover” the “war” by Harper’s Magazine and the New York Times.  I flew into Kuwait on British Airways and caught a flight on an Air Force C-130 to BIAP, Baghdad International Airport, one night with a First Lieutenant in the Civil Affairs Corps I knew. After a stomach-churning high speed corkscrew landing to avoid ground-fire from insurgents who the Bush administration were telling us were not there, my friend and I hitched a ride to an old Saddam office building in the middle of the airport that was being used to house people who were passing through.

The whole airfield was blacked-out so the insurgents who Vice President Cheney told us were not “insurgents” and indeed were not there shooting at American soldiers couldn’t use lights to adjust the mortar fire that rained down every night.  There was no moon, so we couldn’t see a thing.  We used flashlights to find our cots in a room on the 10th floor of the building.  When we woke up the next morning, I crawled out of my sleeping bag and looked out the window and saw Iraq for the first time.

Tents and other temporary military structures surrounded the building on all sides, with gravel paths laid out between them for hundreds of yards.  In the distance were fields filled with row upon row of tanks, armored personnel carriers, and Army Corps of Engineers bulldozers, front loaders and earthmovers.  And beyond them, at least a half mile away, were more fields filled with containers stacked one atop another filled with military supplies – ammunition, meals-ready-to-eat, bottled water, Hesco barriers, god-only-knows what else.

I stood there in the window for a minute looking at this little piece of America that had been erected practically overnight, then I turned to the lieutenant and said, “Oh my god, that’s Vietnam out there, isn’t it?”

We’re doing it all over again.

This coming September, I will have the privilege of being on a panel at the Milford Readers and Writers Festival entitled “Writing about War,” which is supposed to explore covering wars, I guess. The journalist and historian Frances FitzGerald and the Marine veteran and writer Philip Klay will join me.

I told the above story to illustrate the problems you face when you “cover” a war.  The problem I faced that morning was that I had been in Iraq for less than eight hours, I had yet to witness a single shot fired in anger, and yet I knew the story I had come to write was done.  It was over. I might as well have caught the first C-130 out of there that morning, because I had “covered” the “war” as much as it needed covering.  The United States had blundered into yet another military misadventure on foreign soil thousands of miles from our shore, and I knew standing there in that window it would end badly.  We would lose thousands of troops dead and maimed.  Tens of thousands of Iraqi civilians would die. We would spend billions and billions of dollars.  We would still be there years and years later.  And we would not achieve any sort of recognizable “victory.”

And yet, I stayed.  I was over there at great expense, and the least I could do was record the misadventure we had launched as best I could.  So I did.

In the end, no matter the war, there are stories to be written, and all three of us have written some of them, and I’m sure we will fill in the blanks telling a few more in September.  But please don’t come to the Milford Readers and Writers Festival expecting any wisdom at the panel on “Writing about War,” because I don’t have any, and I’m pretty sure Frankie and Philip don’t have any either.  But the three of us will be happy to share with you tales of our own little misadventures covering the greater misadventures which have been this nation’s “wars” over the last five decades or so. We will be happy to take your questions.

But please don’t ask for any wisdom, because it is impossible to be wise about anything as insane was war.