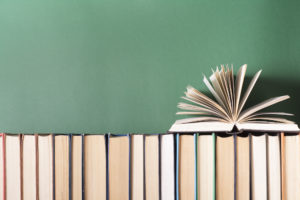 I have been a member of five book clubs around the world.  Starting in Dhaka, Bangladesh, then moving back to Baltimore, Maryland and then overseas to Hanoi, Vietnam. Now  I am a member of two book clubs in Pike County.  Living overseas or transitioning back to the USA, is challenging without a support system, so I seek to build new communities in a variety of ways.  Book clubs are my go- to event for making friends, because the conversations inevitably stir up secrets about our own lives. We grow to know each other better and develop empathy by putting ourselves in another person’s shoes. When you read the same book and share your perspective on the characters and the stories, you connect in a personal way. And reading books we may never choose to read on our own helps us get out of our comfort zone.

In the last three years I have become part of a project that is a new kind of book club – a community-wide festival that celebrates the intimacy between readers and the writers whose books they enjoy. The Milford Readers and Writers Festival has many of the characteristics of my worldwide book club experience – the sense of community that comes from being with others who love to read, and the opportunity to put myself in the shoes of the person behind the book who by taking part in a conversation about the work.

Each book club has been different. The Dhaka, Bangladesh Reading Club comprised eight couples. Although most members were avid readers, there was one who never read the book because he was always working, but he asked the most poignant questions that facilitated funny and thoughtful conversations

When I worked for Catholic Relief Services (CRS) in Baltimore, I joined a book club at the office. Although I had stopped being an active Catholic after high school, it was meaningful for me to have the opportunity to study my religion again as an adult and to hear my colleagues explain their relationships with the Church. The stories were not all positive but helped me understand why their commitment to their faith kept them from dropping out and to appreciate the CRS’s vision to “Put our faith into action to help the world’s poorest create lasting change.”

The largest reading group I participated in was in Hanoi, Vietnam. There were about 18 women representing 10 nationalities. It was not as intimate, but I loved the mix of books we read. One was Kathryn Stocker’s The Help, which ignited conversations about racial discrimination.  I was one of the few Americans there, so I was enlightened and enraged by the stereotypes many of the members assumed about American culture.  We reconciled the stereotypes by comparing the Aborigines of Australia with the racial discrimination in the United States and thinking about how long it takes to undo whatever prejudices we were engrained with as children.

Now I am a member of the Book Worms Club in Shohola and another newly formed group that includes women from  Shohola, Dingmans and Milford, Pennsylvania. Recently, we read Gloria Steinem’s My Life on the Road. The discussion exploded with engaging vignettes about the different journeys in life. The membership age ranges from forties to eighties, so the women’s liberation movement had influenced all of us – for the better or in some cases, creating false expectations depending where we were during that time.

Now that I have joined a second book club, I can cheat and recommend the same books to both groups. It makes it easier to finish the books, although I now accept that there are many ways to participate in reading groups and one way is by just listening to the other members agree to disagree about characters, intentions and the writer.

I am looking forward to listening to – maybe even participating in – the conversation with some of the writers I admire like Susan Faludi who wrestles with American culture from different   viewpoints on gender and Frances Fitzgerald who, back in the seventies, took the time  to research and describe the war from a Vietnamese perspective. Join us on the weekend of September 28th to the 30th and celebrate how Book Clubs cuddle our brains and minds like yoga and spas cuddle our spirits and bodies.